My Aunt Dorothy...She was Quite a Gal!

My Aunt Dorothy was my dad's older sister, and my favorite aunt.  She lived in the very small town of Abingdon, Illinois, roughly about 200 miles due west of Chicago.  My Uncle Leo, her husband, was one of the only dentists there back in the 60's, and she was his dental assistant.  I remember when visiting once, having a loose tooth and Uncle Leo wanted to pull it...even offered to put some string around it.  Nothing doing here...there was no way I was going to subject myself to that, and even now typing about it makes me shudder.  I don't remember how I lost that tooth, but it wasn't due to any of those tactics.  Aunt Dorothy had two vices...smoking and whiskey.  The smoking was evident when you were visiting, and in the morning when she was making bacon and eggs, the cigarette smell wafted through the air in the kitchen.  It was tolerated for two reasons...you told yourself the smell of bacon outweighed the cigarette smell, and Aunt Dorothy was loved by everyone in the family.  That's not to say that I didn't have trouble with this argument between the smoke and the bacon...it was usually summer when we visited her and us kids slept in the bedrooms upstairs with no air conditioning and a small table fan.  No, good sleep was not to be had, so you woke up rather cranky, but in the end, the bacon always won out.  The whiskey was evident only late in the evenings, when the only word I could use to describe her many times was wistful.  She would carry on a conversation with almost an air of wonderment mixed with sentiment...to try to describe this to a tee is hard.  She was also a wonderful cook, and two of her specialties were pot roast with homemade noodles and chicken and dumplings.  You could smell dinner even from the screened-in porch sitting on the glider...and for those of you who don't know what a glider is, your too young to remember.  I also recall in my younger years that next door to her were only two other houses, and then there was nothing but corn as far as the eye could see.  The house next door had pigs, and I used to feed them apples during the day.  Many of their streets in town were brick, and there were also many a time when they had tornadoes touch down near where they lived.  I remember Gail's husband, Chuck, was at the barbecue in Aunt Dorothy's back yard and saw a twister coming their way...so much for that meal.  I also smile thinking of her whenever we had a family gathering and all the siblings in my dad's family danced with one another, and most of those dances were the polka.  Aunt Dorothy would go around the floor with such a poker face, like she was sworn not to smile, and like dancing was the last thing she wanted to do.  It was priceless.  I visited her one year...I was 21, 22...and we went to play bingo one night in a place that served as bingo hall, wedding hall, church hall, etc...one of those all-in-one places.  I ended up winning $100.00, and boy, did that upset her that family from out of town won money when she played religiously every week.  My aunt had two daughters, Ellen and Gail, and they were always my favorite cousins.  I would play piano with both of them when I was little.   They both had the most striking eyes....sort of a blue-green, or that's what I remember...and also had beautiful skin.  They were so pretty and I love them dearly.   Gosh, that was so long ago, and it makes "me" wistful as well, thinking about all the good times and wonderful memories there.  And finally, one of Aunt Dorothy's favorite things to say when she was going to write a letter to you was to say "I'll drop you a line..."  It has stayed with me all these years...one of those things that just doesn't leave you.  So, I guess out of all the family, I chose to write about Aunt Dorothy because I was thinking about her the most, and indirectly, wanted to drop her a line....

I know these aren't the best pictures, but wanted to show you my dad's family...from left, my dad, my aunt rose, my aunt dorothy, my aunt harriet and my uncle jerry..my dad was always such a sharp dresser!!! 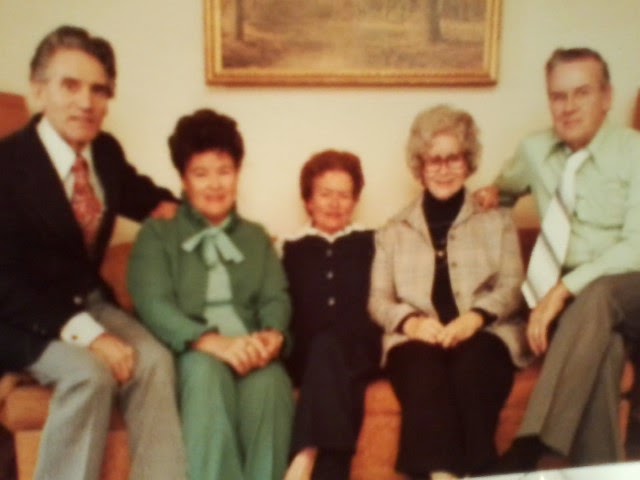 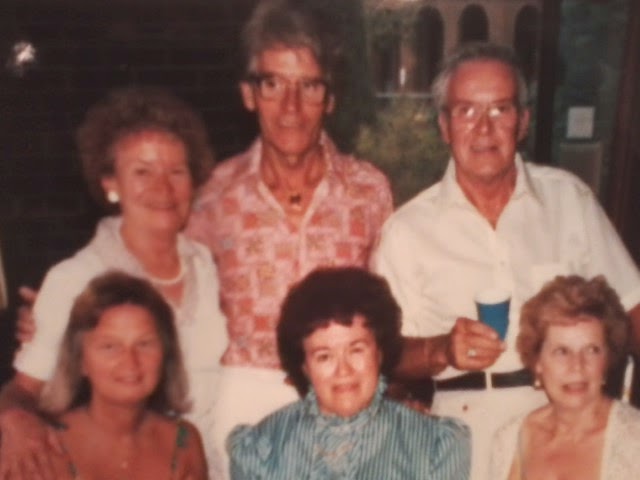