These muffins are filled with wholesome, yet flavorful ingredients, and are a delicious way to start your morning.  I make these for a good friend of mine, a male, who doesn't do a whole lot of cooking, and zero baking.  He really appreciates that he can take 1 or 2 of these out of his freezer and pop them in the microwave for about 30 seconds, for a breakfast on the go.  These muffins aren't laden with fat, and have an assortment of great tasting things in them, along with a little wheat bran for some fiber.  Add some of your own favorite ingredients...just be careful to keep the total amount of increments balanced.

Preheat oven to 350.  Grease a 12 cup muffin tin, or line with cupcake liners.  In a small bowl, stir together the wheat bran and hot water until the bran is completely moistened.  Add the zucchini, raisins, craisins, pecans, coconut and apple, and stir until well combined.   In a large bowl, combine the flour, oats, baking powder, salt and cinnamon until well mixed.  Set aside.  Using a standing mixer, beat together the sugar and eggs on medium for 3-4 minutes, until the mixture thickens.  Reduce mixer to low speed and slowly drizzle in the oil and then the vanilla.  This should take some time, about a minute or so.  Remove the bowl from the mixer.  Add the flour mixture to the egg mixture and fold with large spatula until all ingredients are just combined.  Add the bran mixture and stir with a large spoon until combined.  I use a large scoop to put batter into muffin liners.  You will probably have some batter left over...just fill liners even though they will be quite full.  Bake about 35 minutes, until the muffins are just slightly browned on top.  Use a toothpick if unsure.  After 5 minutes, remove muffins from tin.  I broke open the first muffin so you can see the raisins, craisins, zucchini, coconut, pecans and a few chunks of apple.  On the whole muffins, you can see everything trying to peek out of the top, they're so overloaded...  Bon appetit! 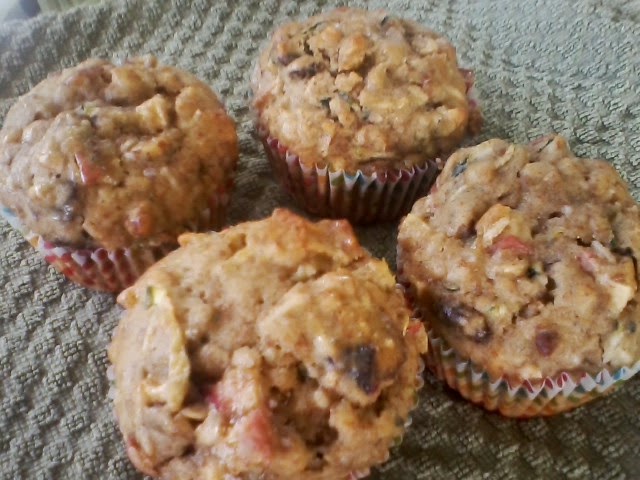 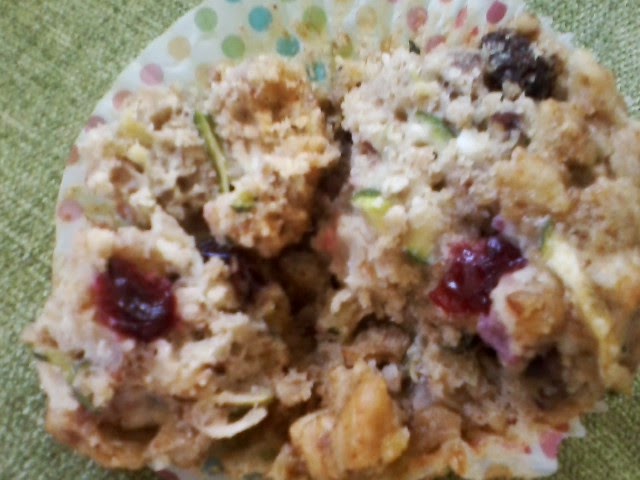