It is Wednesday, and it's the perfect fall day...64 degrees, the sun is shining and there are a few fleecy clouds.  I decided to make an apple galette and put it on the blog.  I know this recipe is pretty much a no-brainer for a lot of people, but for those of you who have never made a galette, would like to make one, and were rather daunted about the process,  the pictures I have provided with this recipe should pretty much guide you through.  It is such a perfect substitute for an apple pie...one crust instead of two, and an arrangement of apple wedges that you can actually see when done.  What I like most about a galette is that it's not so heavy, or to look at it seems like I'm not pigging out as much.   It's when I go for that second or third piece that I realize I'm right back where I started...I could have just had one piece of a 2 crust pie.  But enough about me...your guests will always be impressed even though a galette is such a simple process!

To make the crust, I place everything except the ice water in my mini food processor.  Pulse until you get coarse crumbs.  Add 2 tbsp ice water, 1 tbsp at a time, until the dough just starts clumping together.  Pour out on counter and knead a few times.  Put dough on a large piece of plastic wrap and wrap closed somewhat loosely.  I say that as this is the stage where I pat my dough into a circle and by having the plastic wrap around the dough with some give, it allows you to do this.  Refrigerate at least a few hours, but you can keep it there for up to 2 days.

Heat oven to 450.  Place a piece of parchment paper on a large cookie sheet.  Roll pie dough into a 12" round.  I always have a hard time rolling dough into a circle, so as shown below, I put a dinner plate on a piece of parchment paper, and using a black sharpie, draw a circle around the plate about 1" bigger than the plate.  Flip the parchment over, place on counter and secure with masking tape.  Now you have your template for the dough.  Take a rolling pin and roll the pastry dough onto the rolling pin, as shown below.   Transfer onto the cookie sheet.  In the meantime, cut each apple in half.  Remove core (a melon baller works well), turn halves cut side down and slice thin, about 1/4", as shown below.  Leaving a 2" boarder, arrange apples in a circle, slightly overlapping.  Pile remaining apples in center.  If using cranberry sauce, dot in 7 or 8 places.  Sprinkle apples with sugar mixture and dot with butter, as shown below.  Fold pastry border over apples, overlapping a few times.  Bake 20 minutes at 450, then lower oven to 375 and bake for another 30 minutes, or until the apples are tender and pastry is golden, as shown below.  Cool on cookie sheet for about 10 minutes, then I use a large offset spatula to go under the galette, and then slide over to a cooling rack.  With this galette I brushed some apricot preserves thinned with a little warm water over the apples after I took it out of the oven. 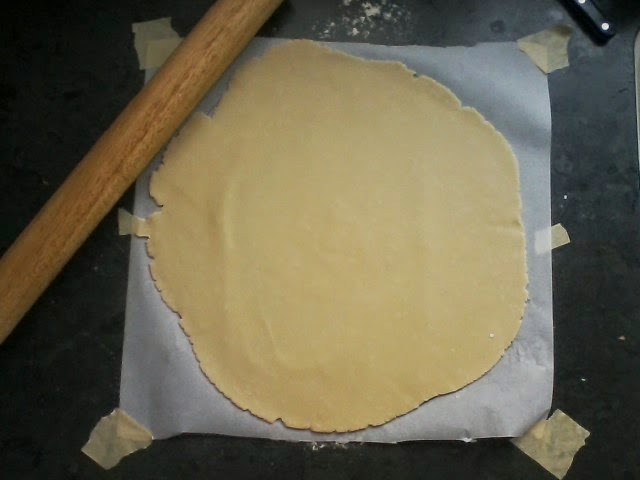 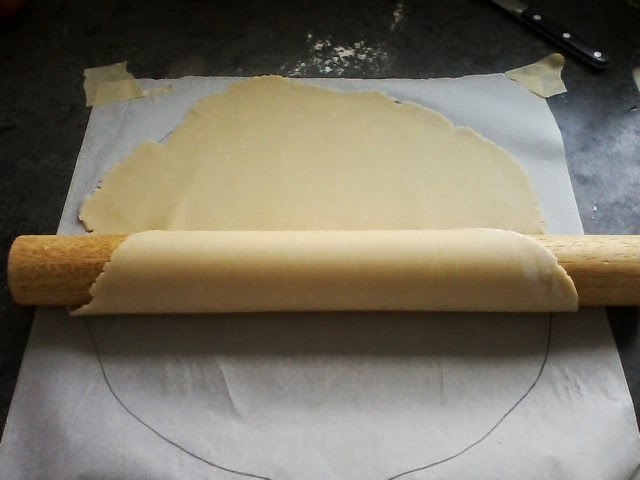 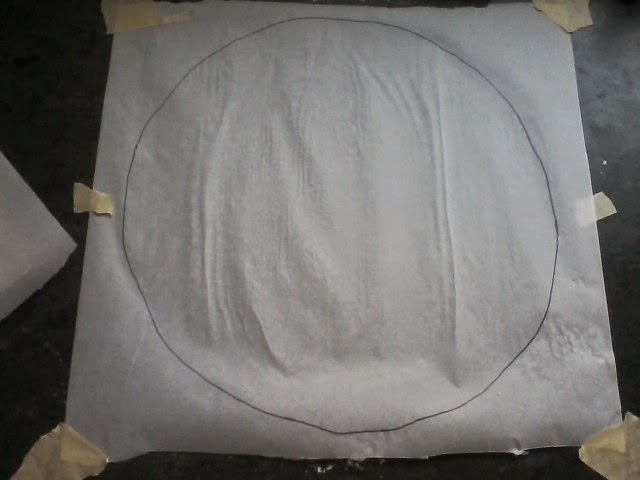 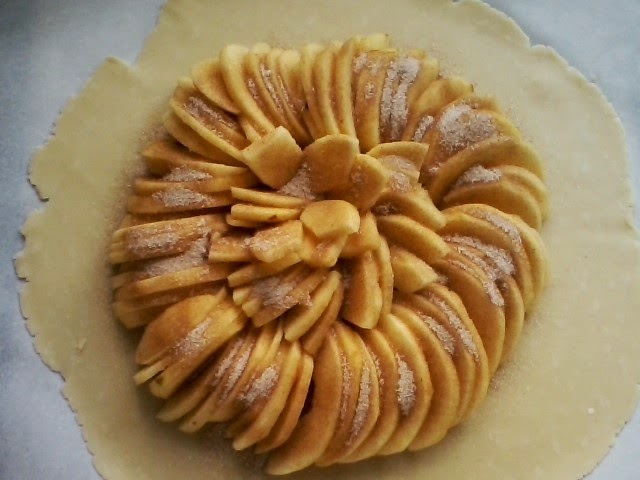 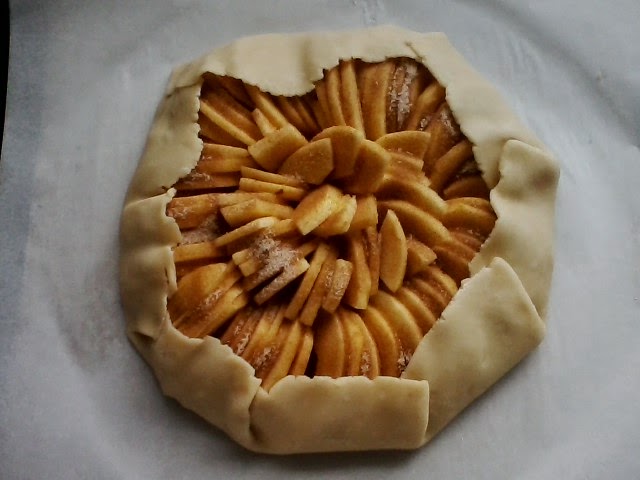 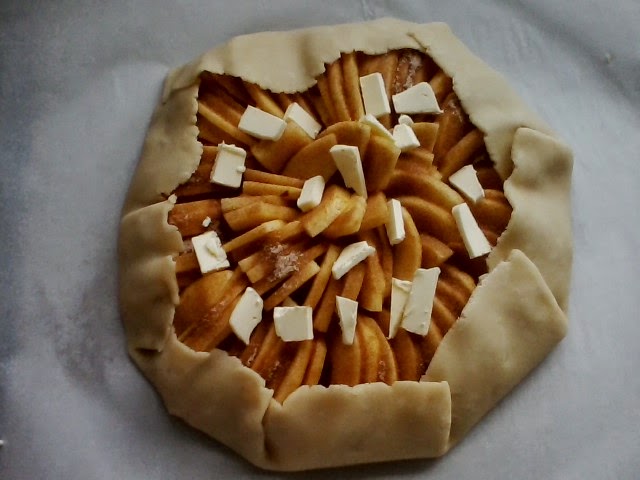 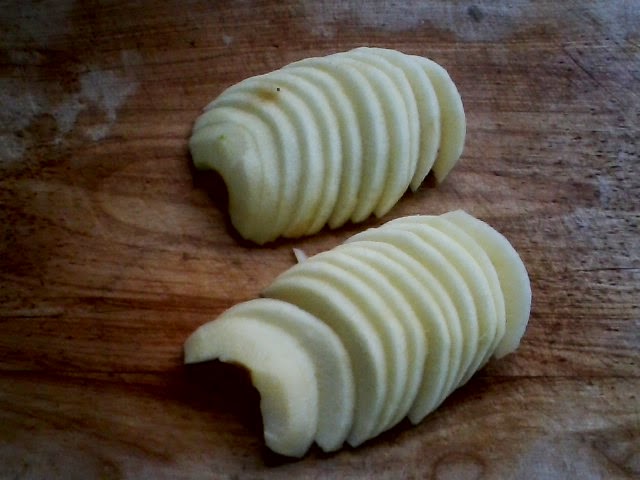 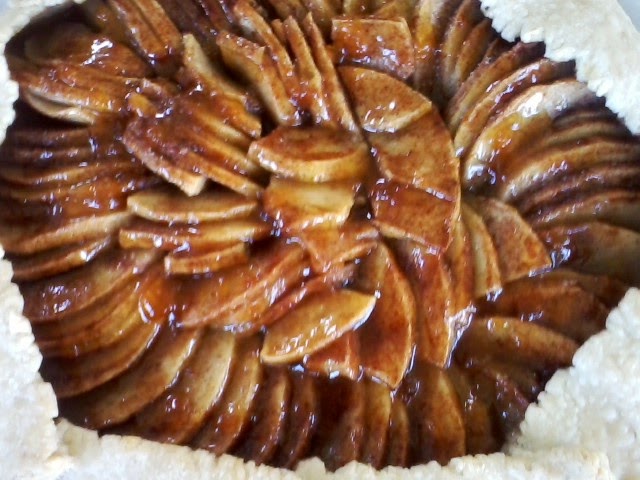 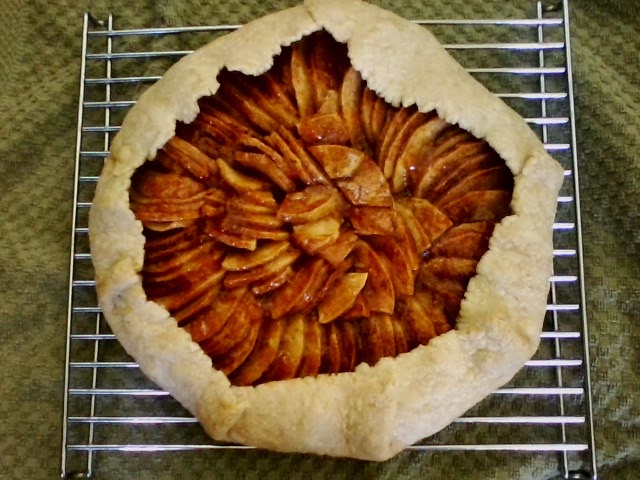