Thirty-four years ago, I worked with a beautiful Greek woman named Angie Malouhos.  This was at our corporate offices in Elk Grove Village, near Chicago.   She was striking at 60, had a model's figure, wore dresses every day and reminded me a little of both ElizabethTaylor and Suzanne Pleshette in her looks.  She had striking blue eyes and black hair (dyed of course), styled in that 60's look...actually, I just now spent 20 minutes trying to find a picture of what I'm talking about, and low and behold, I found it on Elizabeth Taylor, (see below).  She had one ritual every Saturday, and that was to take the train to Marshall Field's in downtown Chicago.  Most times she wouldn't buy anything..she was happy just looking through the store.  Angie would have me over for dinner often, and lived with her sister, Celia.  They always fought like cats and dogs, and it was quite entertaining to listen to the banter back and forth.  Also, one thing I would always get a chuckle out of, but thought it was a smart idea, since the two of them lived alone, was that they had a pair of men's workboots outside the front door.  Sort of the illusion that a male lived inside.  Angie would make her Greek chicken when I came over for dinner, and sometimes would do the same with pork chops.  She also made a lovely one layer graham cracker cake with chocolate frosting, and if any of you know of this recipe, can you please drop me a line?  When I got married in 1985, I moved from Chicago to San Francisco, and Angie gave me the recipe so I could continue the tradition...in my heart, I would have rather stayed back in Chicago.  She was one classy dame!

Wash chicken pieces and pat dry.  Heat oven to 475 (no, that's not a mistake) and have a large low roasting pan ready to go.  The roasting pan I show below is the only one I have...sides should be a little lower if you can.  In a medium flat-bottomed bowl, whisk together butter, olive oil, lemon zest, lemon juice, oregano, salt and pepper.  Dip each chicken piece in lemon mixture, one at a time, and place in roasting pan.  Do the same with the vegetables.  Pour remaining liquid evenly inside pan.  Bake 45 minutes to 1 hour...keep an eye on the liquid...if you need more you can some water or even some white wine.  When chicken and veggies are done, remove from pan and place on platter.  Put roasting pan on stove and with both burners on low, add the other two tbsp butter to thicken the juices.  If you need to after this, add some water, but don't make gravy so thin that it won't have any flavor.  Adjust salt and pepper.  Serve separately in a bowl.  Bon appetit! 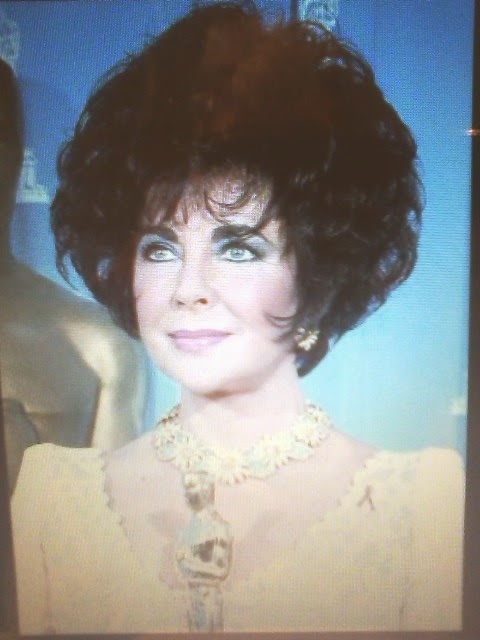 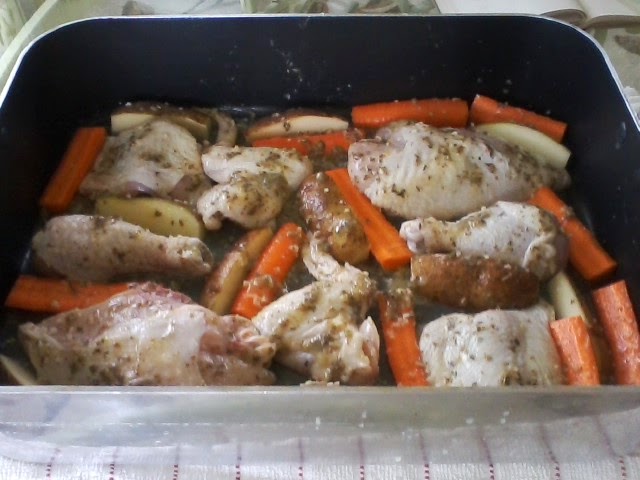 roasted and ready to eat... 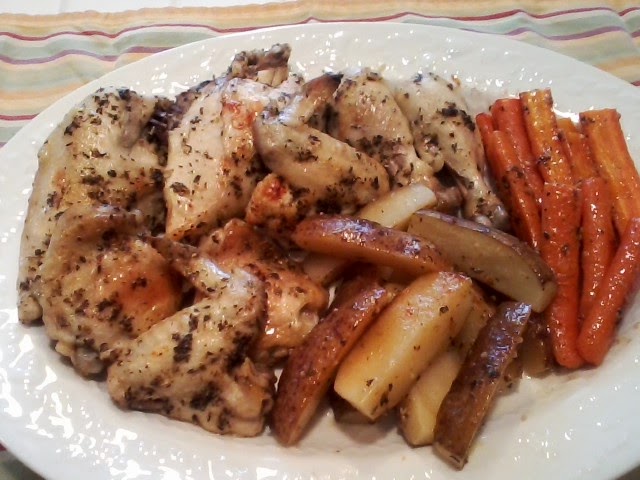 Angie would be proud! 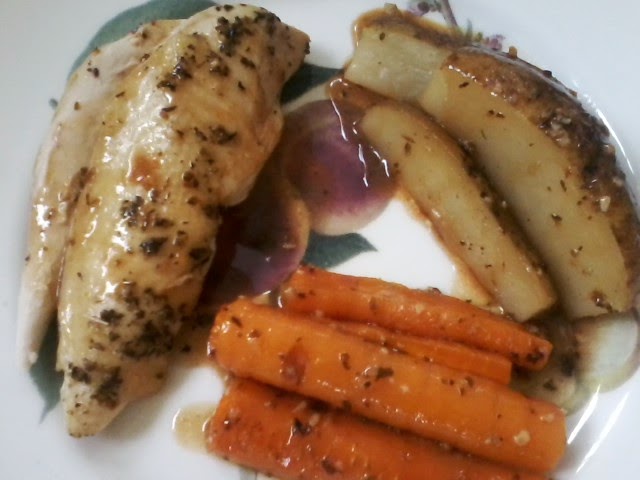