I have stated before that I am not much of a soup person, but when I do have it, I like my soup nice and thick.  That said, a great onion soup with a piece of baguette and some gruyere melted on top could ace that out.  It's not often that I have a ham bone lying around the kitchen...perhaps at Easter, but sometimes not even then.  And, some of you may not want ham in this soup, but I have solutions for all.  Also, this soup usually has no potato, but if it does, it's more often than not chopped up red skin potatoes.  Personally, I love sweet potatoes, so that makes this a whole new ballgame.  Even further, I had some fresh frozen peas in the freezer, not really enough to make anything with, so added them at the end.  I really like the bite they give, as well as the bright color.

If using ham bone or ham hock, place in large stockpot with the water, split peas and chicken stock.  With heat on medium-high continue to cook for 30 minutes, or until boiling.   In the meantime, saute the onion with the butter until just starting to color, about 10 minutes.  Reduce heat on the soup to medium-low and add onions, celery, carrot and sweet potato.  Continue to cook until tender, about another 45 minutes.  At this point you want to take the ham bone or hock out and place on a plate to cool.  You should also see the split peas starting to break down and thicken the soup.  Take any meat from bone or hock and place back into soup.  If you are not using either, but using the Canadian bacon, put in at this point and stir.  If you aren't using any meat, just follow directions, disregarding the meat portions.  Salt and pepper to taste.   I do not put any of this soup in my Nutribullet as it thickens naturally.  Bon appetit!

Below you can see the fresh peas, the chunks of sweet potato, the diced carrot, and if you look closely enough, the Canadian bacon... 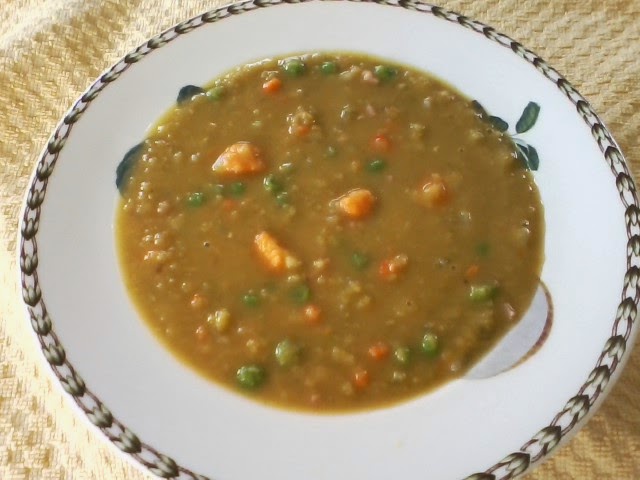 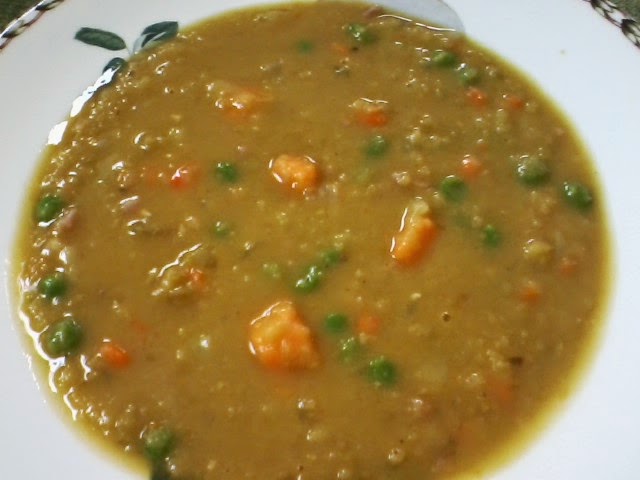