This so-called cake has no coffee in it, although when I made it, instead of using the vanilla extract, I used 1 tbsp irish cream.  Back in the 60's, some cakes, which were made in a tube pan, were called "coffee rings" as they weren't so much a cake, and most contained sour cream and some sort of streusel topping.  I pulled this recipe, along with many others, from my mother's cookbook when she died.  I made it for the first time just recently, as was extremely pleased with the way it turned out.  Something I changed though, was the streusel process.  The recipe calls for all of it to go on top of the cake, which when I cut it, a lot of fell off.   This led me, of course, to make the whole thing over again a few days later...what a boon for my neighbors, who were benefitting from getting this great cake twice.  What I did was spread half the batter in the tube pan, sprinkled half of the streusel mixture, over, carefully spread the rest of the batter on top of that, and finish off with the rest of the streusel.  The result was perfect.  This recipe is great for a family get together, or party, and I assure you everyone will be impressed!

Preheat oven to 350.  Grease a 9" tube pan.  In mixer bowl, beat sugar with 1/2 cup (1 stick) butter until light and fluffy.  Add 2 cups flour and sour cream, eggs, baking powder, baking soda and vanilla (or irish cream); beat at low speed until blended, scraping bowl occasionally.   In a medium bowl, mix chocolate chips with 1 tsp flour.  This will prevent chips from sinking to the bottom of the cake.  Stir in 1 cup of chocolate chips into cake batter.   In medium bowl, put in remaining 1/2 cup flour, brown sugar and cocoa.  With pastry blender, cut in other 1/4 cup butter until mixture resembles coarse crumbs and ingredients are well blended.  Stir in walnuts and remaining 1 cup chocolate chips.  Spread 1/2 half batter around bottom of pan.  Sprinkle half of streusel mixture over, then spread last half of cake batter over streusel.  Sprinkle rest of streusel over cake batter and shake pan a little to make sure streusel settles into place.  Bake for 55-65 minutes until cake pulls away from sides of pan.  Cook cake for 15 minutes, then remove from pan.  Cool.  Bon appetit! 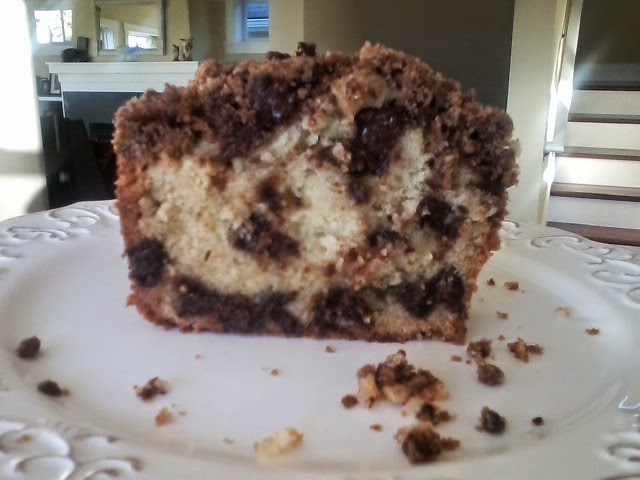 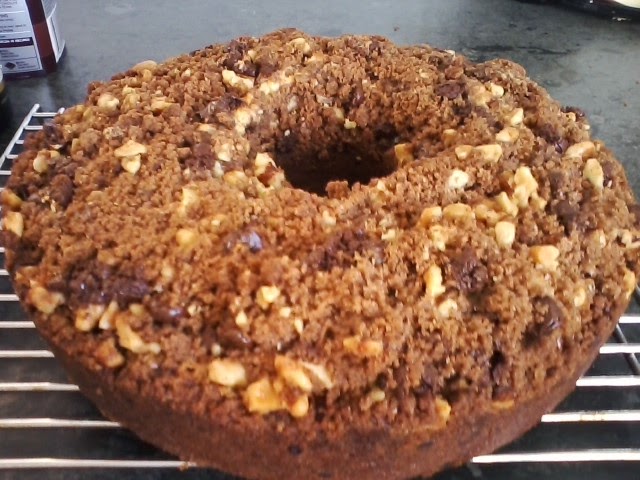 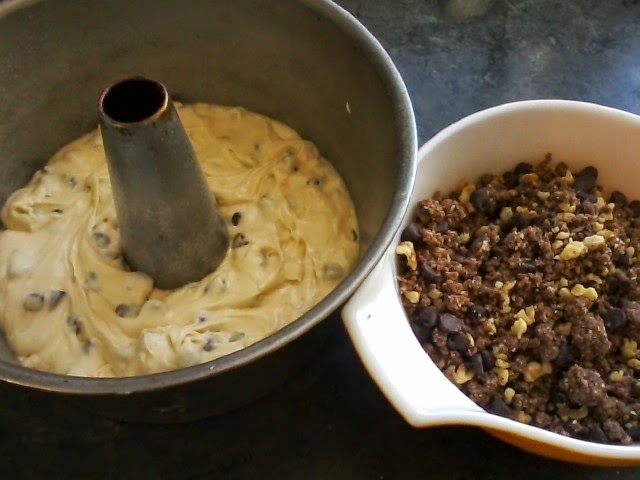