I have made four of Ina's recipes many times around, and this is one of them.  It's my best go-to brownie...

A brownie is not "just" a brownie.  Just like a chocolate chip cookie isn't "just" a chocolate chip cookie.  There are brownies and chocolate chip cookies, and there "brownies and chocolate chip cookies."  They're both a very personal choice when it comes to how one likes them.   I happen to like a very fudgy brownie, almost to the point of it looking raw in the middle.  If you like a cake-like brownie, this is not for you.  As for the title, it says just that...just about.  First, I cut Ina's recipe in half...I couldn't subject myself to eating a 12x18 pan of brownies...well, I could, but won't.  So, with the recipe cut in half, I use a 9x9 pan.   Second, I don't use chocolate chips in the brownies..I think they are decadent enough on their own with the walnuts, and sometimes, I have a problem with mixing 2 or 3 textures of chocolate.  I also don't refrigerate them after making them.  For me, it's sort of like putting a pie or cake in the refrigerator.  And for those of you who worked with me, and knew me well, any anniversary cake of mine, or cake, cookie or brownie I ever brought in was never refrigerated.  I just feel like it dries out, or loses it creaminess, or its runniness, if it's a pie.   And if you're wondering about eating the raw batter...picture a nice warm brownie batter because as part of this, you pour the melted chocolate/butter in the bowl, ending with the flour.  I have been known, after pouring the batter into the pan, and having left some in the bowl for myself, to take a another spatula and swipe it across the batter in the pan before putting in the oven....sad, but true..

Heat oven to 350 and line a 9x9 pan with piece of tin foil, then spray with cooking spray.  Melt butter, chocolate chips and salt over low heat, stirring occasionally.  Allow to cool for 5-10 minutes.  In a large bowl, stir together eggs, coffee granules, vanilla and sugar.  I use a large slotted spoon for this.  Stir in the warm chocolate mixture.  Sift together flour and baking powder.  Add to chocolate batter.  Bake for about 25 minutes to start.  Test with a toothpick after that.  You do not want to overbake these brownies.  If not done, put back in the oven for 2-3 minutes at a time.  You should be putting a toothpick not in the middle of the brownie, but halfway between one corner and the middle, and should get a moist crumb.  Be mindful of this, or your brownies will be cakelike.  Well, the rest is up to you...bon appetit! 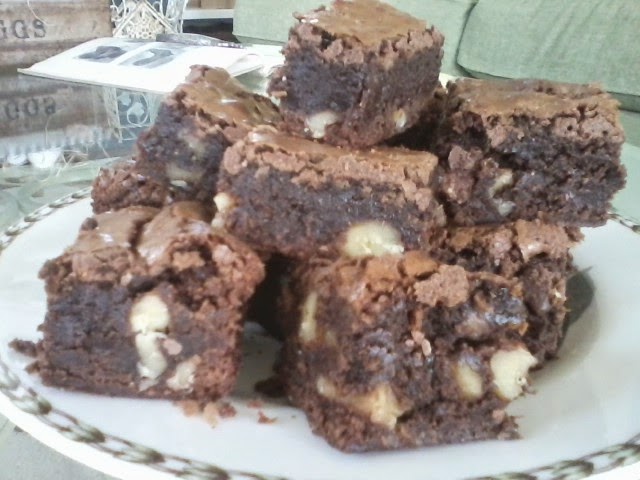 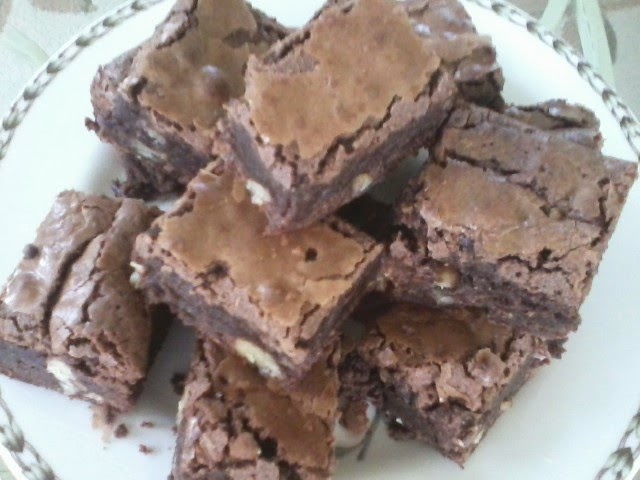 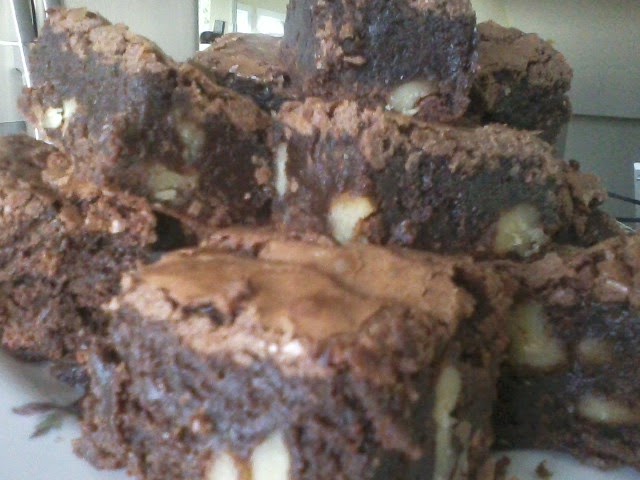