When I think of peaches, I picture a hot summer day while sitting under an old oak tree or a couple of whiskered men in rocking chairs outside a filling station talking about the latest nothing.  Peaches scream summer, there's no doubt about it.  I can't rightly say the same about nectarines or plums...there's just something about a peach.  Perhaps it's the beautiful blush on the slightly fuzzy skin, looking almost like a watercolor.  Well, I could go on and on, but this is about peach crisp, not about what my memories are bringing to mind.  The filling has touches of almond and cinnamon, and the crisp...well, it vies for the same prize as the peaches because its makeup is not the usual oatmeal, but graham crackers.   Yes, you read it right, and once you try this wonderful crunchy topping, I think you will be hard pressed to go back to any other.  This recipe will make four lovely 3" ramekins of peachy goodness.  Now, let's prep and bake...

Heat oven to 350.  Place all of the filling ingredients in a medium mixing bowl and stir until thoroughly incorporated. Let sit at least 30 minutes, but no longer than an hour.  In the meantime, make the crisp topping by mixing the dry ingredients with the butter either with a fork or a pastry cutter until it resembles peas or small marbles.  Do not overmix.  Spoon peach mixture evenly into the 4 ramekins and place the crisp mixture on top.  You should be able to mound the topping fairly high on each ramekin but it will go down a bit when baking in the oven...do not pack down.  Place ramekins on baking sheet and bake for 15-20 minutes, or until the crisp is a nice golden brown.  Remove from oven and let sit about 20 minutes.  While the crisp is cooling, whip cream in a standing mixer or hand mixer on highest speed.  Whip the cream until soft peaks form, then add the sugar and vanilla extract, beating for about another minute.  Spoon the whipped cream over still warm peach crisp.  Bon appetit! 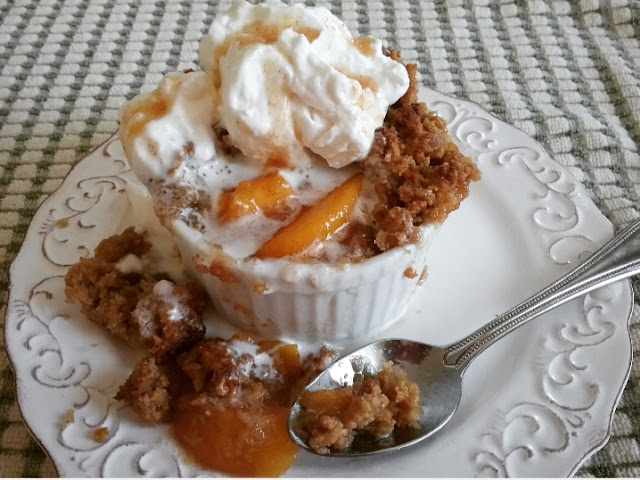 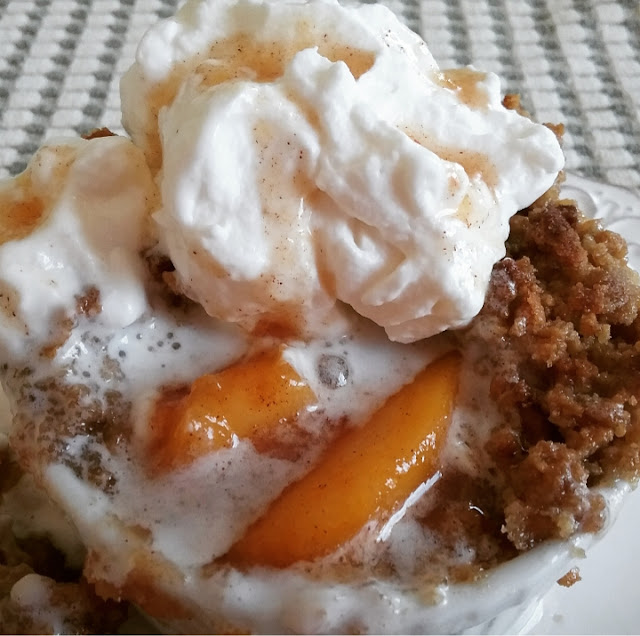