This is the time of year when tomatoes are in abundance, at least here in the states.  In the Seattle area where I live, we have had an extremely warm summer with many days hitting 90 degrees F and no rain to speak of since the end of  May.  I have been sitting on this particular recipe for 15 years...I know, a very long time to sit.  But when I saw a friend post a tomato pie video on Facebook yesterday and said she had never made one (truth be told, neither had I because remember, I had been sitting on my recipe for 15 years), I told her I would get in the kitchen and make one for both of us.  A few things I thought about putting in this pie...some chopped bread and butter pickles or some fresh diced sage, but I wanted to keep the authenticity of the dish the first time out.  I chose not to use mozzarella because it reminded me too much of a pizza. So, now that all my comments are out of the way, here it is in all its glory!  I bought a refrigerated pie crust to use for this recipe as I like to accommodate those who would rather not make a crust from scratch.  If you "aren't" one of those, by all means make your crust from scratch.  Either way the pie will be fantastic.  Now, let's prep and bake...

*I didn't peel my tomatoes and wish I had because after baking, I noticed skins peeking out from the pie.  No tomato pie that I have ever found suggests this, but next time, it's a given.

**I used 1 1/2 cups Mexican 4 cheese and 1/2 cup grated fresh parmesan for my two cups.  You can certainly use gruyere, cheddar, mozzarella, etc.

If you're using a store-bought pie crust, follow the direction on the package for pre-baking, usually 10-12 minutes in a 450 oven, or until lightly browned.  Remove from the oven and set aside while you make your filling.

Place the tomatoes in a single layer on a paper towel lined baking sheet.  Sprinkle with the 1 tsp. salt and let stand about 15 minutes.  Place tomatoes on clean paper towels and cover with another layer of towels.  Press down to get as much liquid out of the tomatoes as you can.

Saute the onion in 2 tsp. olive oil with salt, pepper and the thyme, about 3 minutes, or until tender.

Set aside a few slices of tomatoes if you want to place on top of pie before baking.  It does make for a lovely presentation.  Layer the onions, basil and tomatoes in your prepared crust.  Stir together the mayonnaise and sour cream and add your cheese(s).  Spread over the pie...I use my offset spatula for this.  Bake at 350 for 30-45 minutes, or until top starts to brown.  Remove from oven and cool for at least 30 minutes before serving.  Bon appetit! 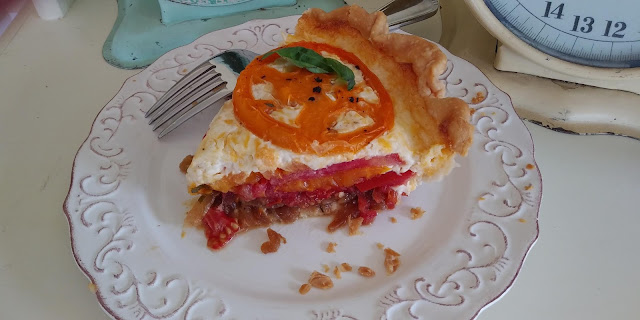 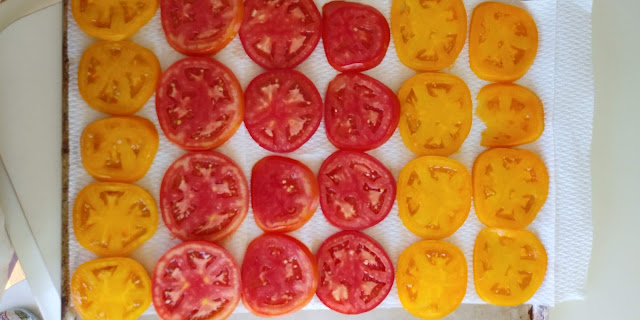 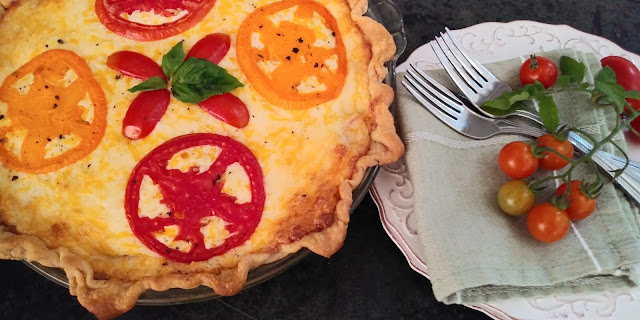 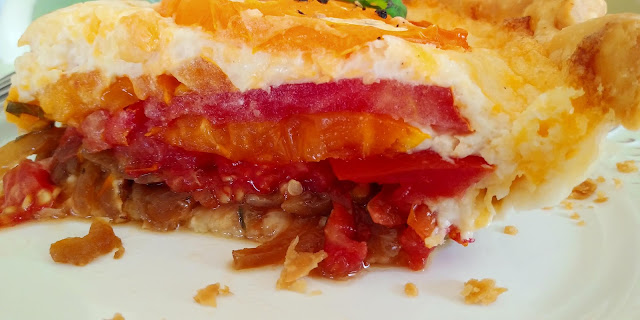