My Trip to Waco, Texas...Home to Fixer Upper, Part 1

I have watched my share of home improvement shows and didn't really want to add another to my list.  But some of my friends couldn't believe that I had never watched Fixer Upper, which has been on the past five years, most of which I haven't a part of.  So, one day I tuned in and mainly because my home decor is a mix of farmhouse/cottage and I was very pleasantly surprised.  I loved that they showed their clients 3 homes, with a different perspective on each.  I marveled at Chip's happy-go-lucky attitude in 95 degree heat (probably more in the house).  I was in awe of Joanna's interior design talent and decisiveness when it came to putting rooms together.

Then came Magnolia, the store; then Magnolia Table and finally, the Bakery.  Also thrown in the mix were the various antique stores and design stores that Joanna frequented when looking for something unique for the particular home they were decorating.  I programmed my DVR, catching each subsequent show.  I was hooked!

So, when they ended the show, I had it in my brain that I would mosey down to Waco one day and spend a few days at The Silos to see firsthand what it was all about.  This is part 1 of my trip.

Flew from Seattle to Dallas which was a 4+ hour flight.  When I left Seattle, it was 50 degrees and upon arriving Dallas, it was 90...quite the change.  I had to get the rental car and then had an hour and a half drive down to Waco, which went fairly quickly since the speed limit on the interstate was 75 mph most of the time.

Have any of you had an In-n-Out burger?  I had not, and passed a few along the way.  I had heard it was Ina Garten's fave burger so I had to find out what "that" was all about.  Upon entering Waco, low and behold, there was an In-n-Out, so in I went.  Got their basic burger and shake.  What would I give their burger?  Probably a 6 out of a 10.  The chocolate shake was a total washout and giving it a 4 was generous.  Unfortunately, it lacked any flavor whatsoever, and I wasn't about to finish it just to drink a shake.

Checked into a very beautiful restored Airbnb just a few blocks from the Silos called The Best O Inn.  Kim and Marcus are the proprietors and rates were very reasonable.  Below are pictures of my first day.  Part 2 coming up... 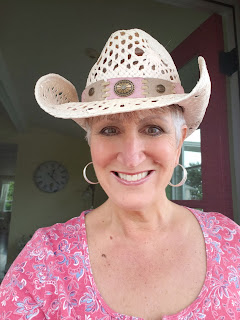 me the day before my trip 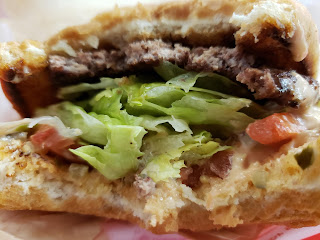 the burger from In-n-Out...From what I was told afterward, I should have ordered it animal style 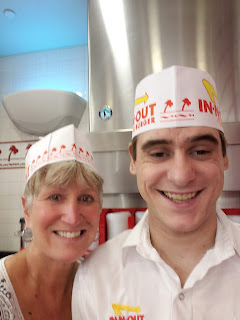 Having fun with the manager 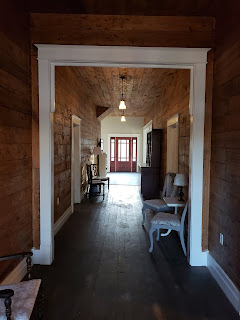 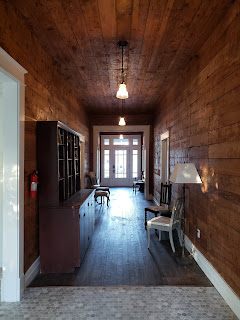 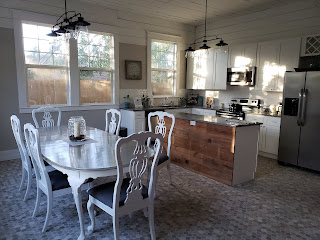 This is the beautifully restored kitchen, and of course, more shiplap on the island 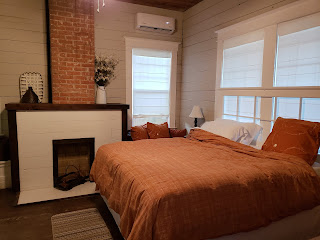 My room which was lovely
Posted by Unknown at 6:27 PM